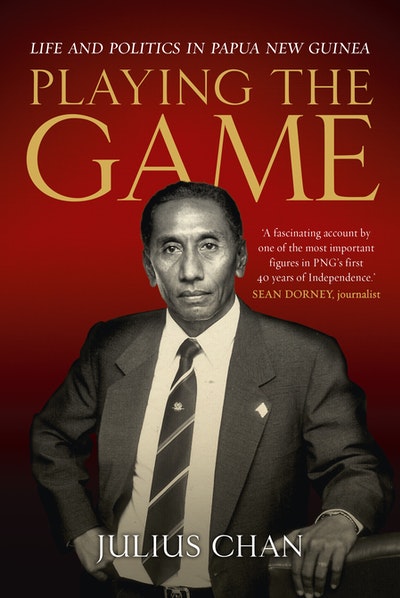 Playing the Game is Chan’s own account of the role he played during these decades of political, economic and social change. It also explores the vexed issues of increasing corruption, government failure, and the unprecedented exploitation of PNG’s precious natural resources. This compelling memoir of Julius Chan’s private and political lives offers a rare insight into the building of a nation and the extraordinary challenges facing Papua New Guinea.

Julius’s early story is about growing up in the era of Australia’s control of the Trust Territory of New Guinea, and finding his own particular space as the child of an indigenous mother and a Chinese migrant father. It is a story rarely told but that  will resonate with many others who have experience of similar circumstances and moments in history: the Japanese occupation in World War Two, and the changes in governing authorities right through to the birth of the nation of Papua New Guinea. Not many, though, might be able to relate to Julius Chan’s political path, its ups and downs, leading right back to his home, New Ireland.