Again I am talking about Ian Townsend’s Line of Fire. Reading it took me back to my teenage years. His characters lived in pre-World War Two Rabaul while I had lived in pre-Independence Rabaul (1960s) but life and the inhabitants had not changed very much between my recall and Ian’s narration. While the circumstances of Ian’s story sit behind my stories (the shambolic preparations for an invasion, the impact of Japanese occupation and extreme bombing by not only the enemy but also the allies), Ian’s novel is mostly located within the social group that locals would call ‘Europeans’ or “Expatriates’. Mine is about those who are almost invisible – neither indigenous nor western – and yet Ian does not overlook them. On page 174 of Ian’s novel, there’s one appearance that works for me here. It’s the early stages of the Japanese Naval attack on Rabaul and a key character (who hadn’t been seen since his home was bombed) is led to a place ‘called Refuge Gully behind the town, where about 30 civilians … and about 200 Chinese and New Guineans were camped … The Chinese shopkeepers had nowhere to go. They kept their wives and children with them, terrified after having read about the Japanese massacre of civilians in Nanking.‘ My novel’s characters are based on the stories I have heard from Chinese, Mixed-Race (their name for themselves) or Malay/Ambonese families of Rabaul, many of whom had lived in Rabaul for two or three generations, and too many of them no longer able  to return to their country of origin for a whole raft of reasons.

In 1975, a new nation of Papua New Guinea (PNG) was focused on uniting its many tribes and language groups. These nation-less souls were very worried about their futures. 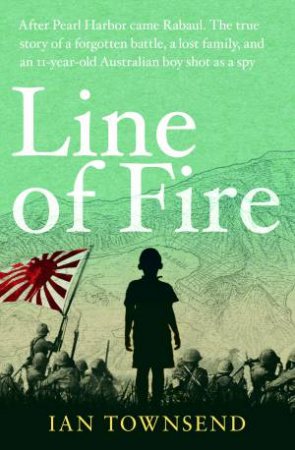 Ian Townsend’s excellent novel (already mentioned in an earlier blog) should be first book to be acknowledged.

The little known and intriguing WWII story of an eleven-year-old Australian schoolboy who was shot by the Japanese in Rabaul in 1942 as a suspected spy – a compelling story of spies, volcanoes, history and war.

In May 1942, in the town of Rabaul in the Australian territory of New Guinea, five Australian civilians were taken by Japanese soldiers to a pit at the base of a volcano and executed as spies.

A mother, her brother, her husband and her friend. And her 11-year-old son.
Who were these people and what had led them to this terrible end, under the shadow of a volcano?
Acclaimed 4th Estate author and award-winning science journalist Ian Townsend has uncovered a fascinating story that sheds new light on a largely forgotten but desperate battle fought on Australian territory. The Australian Government, unable to reinforce its small garrison, abandoned more than 1500 Australian soldiers and civilians as ‘hostages to fortune’ in the face of the irresistible Japanese advance. Set against the romantic, dramatic and ultimately tragic backdrop of Rabaul in WWII, this is a wholly intriguing narrative of Australian history, military conflict and volcanology, woven together with the story of one ordinary but doomed Australian family.

Hi there. First blog and I still haven’t got WP under control, so please be patient. This website has a dual purpose. One is for me, the writer and reader, to explore any aspects of the joint practices of writing and reading, including my own efforts. The other is to gather information and to acknowledge any stories I come across about a town called Rabaul in Papua New Guinea. I spent six short years living in during my teens but it left an indelible mark. As author Ian Townsend (Line of Fire 2017) suggests in his non-fiction novel, anyone who has ever lived there, continues to love it. It stuns me that so little is being written , and this implies so much history is already lost.  And the few works, academic or creative, that have been written are scattered. Will the efforts of the rare breed of storytellers who tackle the difficulties of limited research material slip between the cracks?